Veteran (almost) blues singer who performs on guitar and harmonica.  He has been active since the 1960's and has many recordings to his credit.
9th
Singers & Musicians Night
If you've got a new song and want to try it out on an appreciative audience, then tonight’s the night.
16th
Feuding Lloyds

Folk and Americana from a 5 piece, featuring harmonica, banjo, mandolin, guitar and bass.
23rd
Brian Cole Tribute Night
Hi all,
To ensure that we have the restaurant for Brian's tribute night we have had to change the night from 9th February to 23rd February.  We hope this hasn't upset anyones plans. 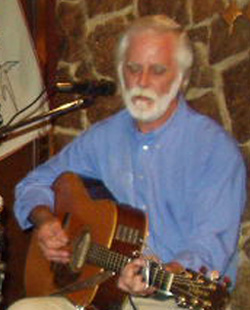 I'm sure by now that a lot of you will know that Brian Cole died on the morning of Wednesday 14th December 2011. Tonight we are holding a tribute to Brian.

Everyone is welcome (Including those who did not know Brian) to come along and say their goodbyes in their own way with a song, poem or just to listen.  John Russell, one of Brian's best friends, will be hosting the evening. It is expected that the night will be broken up into time slots of around 10 minutes each so that as many people as possible can get a chance to take part.  If you wish to perform then please let us know, via e-mail or phone.  The address can be found in the main index.

During the evening there will be a collection in aide of Brian's favourite charity the RSPB.

Don't forget to include what you intend to do, so as to avoid repetition. Hope to see you on the night.

Those who performed on the night

Email from John Russell after the event 24th February 2012

Dear All,
I just wanted to say thank you for making Thursday 23 February 2012 such a memorable evening.  It exceeded my hopes and expectations - you were all brilliant, and I know that Sarah really appreciated it.
(Steve - perhaps you could forward this to Ted, Anne, Dave Plane, Doug Field and Rick Christian, whose addresses I don't have.)

There was, in fact, nearly £93 in the pot, and I have sent the RSPB a cheque today - see attached letter.
(Not attached to this post)

Ann, my wife, took many pictures, so if you'd like them on DVD let me know your address and I'll get them to you.